A Wheel of Hours – Jan Nuttall 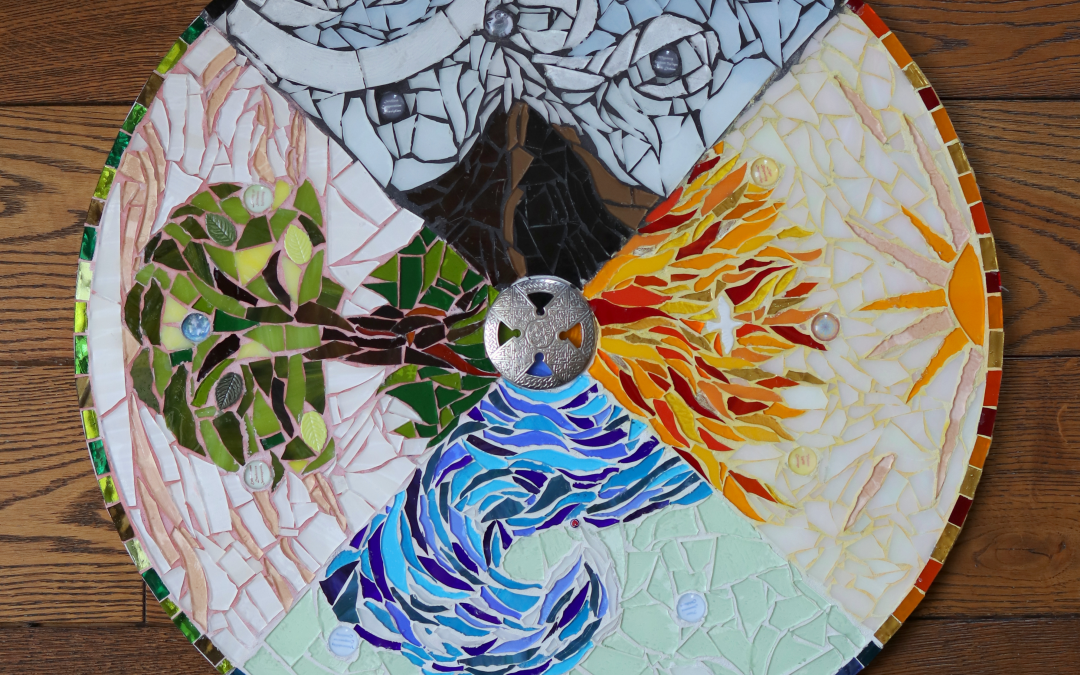 “This essay is a story of longing. In my reflections on the MA Creative Project, both process and outcome, I have seen the story emerge from the shadows. It has been there for most of my life, but the telos of the narrative has become much clearer through engaging wholeheartedly with the project.  During that time I have felt inspired, frustrated, ecstatic, liberated, stuck, maddened and ultimately touched by something sacred that is at once very ancient and experienced as new. At the beginning of December I wrote to a friend that ‘my project has fallen off the cliff of sanity and is so deep in my heart and soul that I have no idea how to explain any of it”.

We shall not cease from exploration

And the end of all our exploring

Will be to arrive where we started The medicine wheel is both a physical thing and a complex metaphor for the cosmos and the human experience within it. There is a 5,000-year-old stone wheel in Canada, almost certainly created for ceremonial and ritual use; the indigenous peoples of the Americas also used it to transmit sacred teachings which guided individuals and the community. This essay, and my story, is not an academic critique of the concept, nor a ‘lesson’ in the teachings of the medicine wheel. However, in order to locate it in my narrative and talk about its impact, I must describe it briefly, based on  what I learned in my mid thirties.

The wheel represents seven directions: four cardinal (East, South, West, North) and Above, Below, Within. There are many intermediate directions; for simplicity however, and because I am not an adept, I chose to limit myself to five for the project – the cardinal directions and Within, which I have called the Sacred Centre. Understanding the four directions, and living them, brings a person or a community to a state of balance where they can experience, rather than just think of, themselves as part of the sacred whole. e poet David Whyte writes: ‘LONGING is. . . the defenseless interior secret core of a person receiving its overdue invitation from the moon, the stars, the night horizon and the great tidal flows of life and love. Longing is divine discontent, the unendurable present finding a physical doorway to awe and discovery . . . . Longing has its own secret, future destination, and its own seasonal emergence from within, a ripening from the core, a seed growing in our own bodies. . . leading back to some unknown origin with its own secret timing indifferent to our wills. . . to a. . . future, to a transformation, to a life we want for ourselves and to the beauty of the sky and the ground that surrounds us’.  (Whyte, 2015:135,136-7) The Book of Hours from my proposal did happen. I have a binder for each of the directions and a collection of texts printed on handmade paper, to which I shall add over time. The book matters. Edward Clarke, poet and teacher, said in a recent broadcast: ‘Without [a holy] book we don’t have a future and without art’s completion of that book, we don’t have a fructifying relationship with it . . . As the Last Judgement completes creation, so art completes the text’ (Clarke, 2018). The imaginative encounter with the wheel through art has certainly deepened and intensified my relationship with my texts in a perfect example of what Iain McGilchrist would describe as the left and right hemispheres, or two modes of knowing, working together in balance. (McGilchrist, 2012)