‘The Descent of Inanna’ – a play by Suzanne Corbie 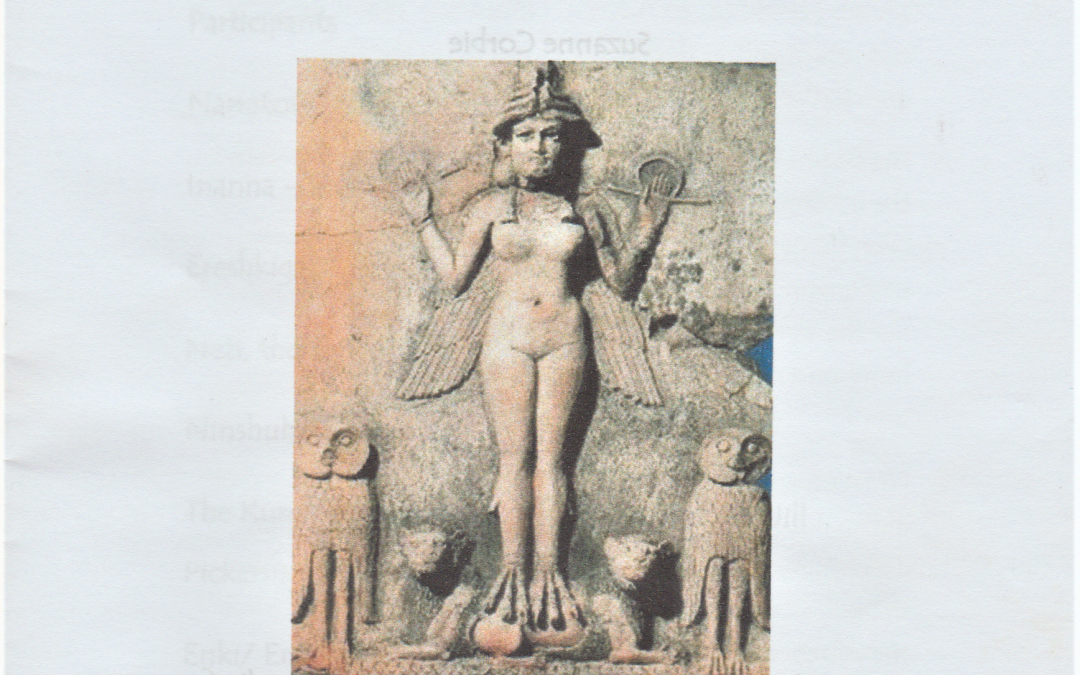 THE STORY OF INANNA

Inanna abandoned heaven and earth to descend to the underworld.
She abandoned her office of holy priestess to descend to the underworld.
She abandoned her temples in Uruk, in Badtibira, in Zabalam, in Nippur, in Kush and in Akkad to descend to the underworld.
She gathered together the seven me,
She took them in her hands and she prepared herself
She placed the shugurra, the crown of the steppe on her head.
She tied the small lapis beads around her neck,
Let the double strand of beads fall to her breast,
And wrapped the royal robe around her body.
She daubed her eyes with ointment and called “let him come, Let him come.”
She bound the breastplate called “Come, man, come!” around her chest,
She slipped the gold ring over her wrist
And took the lapis measuring road and line in her hand. Inanna set out for the underworld.
Ninshubur, her faithful servant, went with her.
Inanna spoke to her, saying:
“Ninshubur, my constant support,
My sukkal who gives me wise advice
My warrior who fights by my side
I am descending to the kur, to the underworld
If I do not return,
Set up a lament for me by the ruins
Beat the drum for me in the assembly places
Circle the houses of the gods
Tear at your eyes, at your mouth, at your thighs
Dress yourself in a single garment like a beggar.

Inanna continued on her way to the underworld
Then she stopped and said;
“Go now, Ninshubur –
Do not forget the words I have commanded you.” When Inanna arrived at the outer gates of the underworld,
She knocked loudly.
She cried out in a fierce voice:
“Open the door gatekeeper
Open the door, Neti!
I alone would enter!”
Neti, the chief gatekeeper of the kur, asked;
Neti “Who are you?”
She answered:
“I am Inanna, Queen of Heaven,
On my way to the East”
Neti: “if you are truly Inanna, Queen of Heaven,
On your way to the East
Why has your heart led you on the road
From which no traveller returns?”
Inanna answered;
“Because.. of my older sister, Ereshkigal,
Her husband, Gugalanna, the Bull of Heaven, has died.
I have come to witness the funeral rites
Neti: “Stay here, Inanna, I will speak to my queen
I will give her your message.” “Neti the chief gatekeeper of the kur
Entered the palace of Ereshkigal, the Queen of the Underworld, and said
Neti: “My queen, a maid As tall as heaven
As wide as the earth
As strong as the foundations of the city wall,
Waits outside the palace gates.
She has gathered together the seven me
She has taken them into her hands
With the me in her possession, she has prepared herself
When Ereshkigal heard this,
She slapped her thigh and bit her lip
She took the matter into her heart and dwelt on it
Then she spoke;
Ereshkigal: “Come Neti, my chief gatekeeper of the kur
Heed my words;
“Bolt the seven gates of the underworld
Then, one by one, open each gate a crack
Let Inanna enter.
As she enters, remove her royal garments
Let the holy priestess of heaven enter bowed low.”
Neti heeded the words of his queen
He bolted the seven gates of the underworld
Then he opened the outer gate
Neti: “Come, Inanna, enter.” …..,From her body the royal robe was removed
Naked and bowed low, Inanna entered the throne room.
Ereshkigal rose from her throne,
Inanna started toward the throne.
The Annuna, the judges of the underworld, surrounded her
They passed judgement against her
Then Ereskhigal fastened on Inanna the eye of death
She spoke against her the word of wrath
She uttered against her the cry of guilt
She struck her.
Inanna was turned into a corpse,
A piece of rotting meat
And was hung from a hook on the wall.
When after three days and three nights, Inanna had not returned, Ninshubur set up a lament for her by the ruins
She beat the drum for her in the assembly places,
She circled the houses of the gods
She tore at her eyes; she tore at her mouth; she tore at her thighs
She dressed herself in a single garment like a beggar
Alone, she set out for Nippur and the temple of Enlil.
When she entered the holy shrine,
She cried out;
“O Father Enlil, do not let your daughter
Be put to death in the underworld
Do not let your bright silver
Be covered with the dust of the underworld
Do not let your precious lapis
Be broken into stone for the stoneworker
Do not let your fragrant boxwood
Be cut into wood for the woodworker`
Do not let the holy priestess of heaven
Be put to death in the underworld”
Enlil: “My daughter craved the Great Above.
Inanna craved the Great Below.
She who receives the me of the underworld does not return.
She who goes to the dark city stays there”
Father Enlil would not help. Neither would Father Nanna in the city of Ur but
Father Enki in Eridu said: “What has happened?
What has my daughter done?
Inanna! Queen of All the Lands! Holy Priestess of Heaven!
What has happened?
I am troubled. I am grieved”
And from under his fingernail Father Enki brought forth dirt.
He fashioned the dirt into a kurgarra, a creature neither male nor female
From under the fingernail of his other hand he brought forth dirt
He fashioned the dirt into a galatur, a creature neither male nor female
He gave the food of life to the kurgarra
He gave the water of life to the galatur
Enki spoke to the kurgarra and galatur, saying;
Enki: “Go to the underworld
Enter the door like flies
Ereshkigal, the Queen of the Underworld is moaning
With the cries of a woman about to give birth
No linen is spread over her body
Her breasts are uncovered
Her hair swirls around her like leeks
When she cries, ‘Oh! Oh! My inside!’
Cry also, ‘Oh,! Oh! Your inside!’
When she cries, ‘Oh! Oh! My outside!’
Cry also, ‘Oh! Oh! Your outside!’
The Queen will be pleased
She will offer you a gift
Ask her only for the corpse that hangs from the hook on the wall
One of you will sprinkle the food of life on it
The other will sprinkle the water of life
Inanna will rise.

The kurgarra and the galatur heeded Enki’s words
They set out for the underworld
Like flies, they slipped through the cracks of the gates
They entered the throne room of the Queen of the Underworld.