Shaping our World by embracing Ourselves: how the whole self is involved in shaping our personal landscapes and mythologies, by Laura Hood 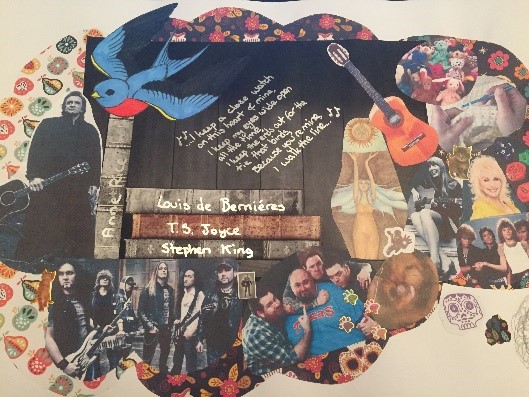 The creative project offered me a chance to enter the academic realm with a topic which sparks joy and enthusiasm in my heart (comic books) but also allowed me to explore some themes which interest me on an intellectual level – myths, and how myth is involved in shaping the landscape of belief, on a personal and cultural level. Through my interest in comic books the role of the hero is especially interesting for me, because it is in the struggles, adventures, victories and realisations of the hero that the morals and rules of a society are transmitted. After all, the hero is held up to society as a paragon of virtue and morality, the hero is the standard against which all others are measured. Furthermore, the idea that superheroes and their stories could be interpreted in the secular sense as new mythologies for our modern era was an exciting discovery, as I had never given much thought to the deeper meanings within the comics and heroes I love so much. However, as I began to formulate a way to explore the hero’s journey, I realised that I myself am not a hero, nor am I on a hero’s journey. My interest sparked from Kripal’s quote was in the role that secular influences play in the creation, adaption, and evolution of the individual’s personal and spiritual landscapes, not on superheroes themselves. I was interested in what other aspects of secular life (aside from comic books) can or could have an influence on how individuals shape their own spiritual landscapes and mythologies. When seeking a medium for my creative project, I was in the beginning at a loss. I am not a painter, nor am I a poet or maker of great and beautiful things, and I confess (if I may) to looking at the work of previous students, and listening to the ideas of my peers, with something akin to jealousy and awe. I am not an artist or ‘creative’ in the accepted and conventional way, but I do consider myself to have a creative streak, in which scissors, glue, glitter, and stickers play their individual parts, and it was in a class exercise that I finally managed to find my medium – collage – a medium which at once combines my artistic ‘strengths’, while offering a way to cover any mistakes very easily! I embarked upon my creative project with the intention of creating a complex but understandable method of exploring the impact of secular culture and life upon the individual’s personal and spiritual landscape; however, I completed my project with something much more satisfying and in my opinion much richer – a better understanding of myself and the complexities of my own personality, spirituality, and academic development.