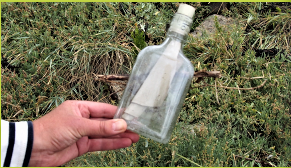 This presentation, called Messages in Bottles – Drifting Treasure, was made to an open group of Cosmology M.A. students and tutors during a research day, 13 December 2015, in Canterbury Priory. Lasting half an hour, it took the form of a spoken and illustrated personal narrative. It re-created aspects of a meditative walk taken along the Thames foreshore – a literal path, looking out for messages in bottles, but also a metaphorical and mythopoetic path, asking the self and the cosmos questions along the way, and acting upon the answers received. I had spoken to mudlark Nicola White, gone out on a long river walk with her, and looked at many of the bottle-messages – over 80 at last count – she has found over her years mudlarking. I felt in our walking a lovely combination of free-floating outer attention, yet with inner intentional direction, and saw that we as humans are meaning-seeking creatures. We seek a mythic dimension (mythic in time, space/distance and archetypal meaningfulness). I longed to find a message in a bottle myself. I also felt the powerful, ancient, timeless presence of the river, of place as sacred. I found a message, but not in a bottle – instead, a plastic shrine with God Bless You written on it. We long to be seen, found, known and loved – by the cosmos, in its everywhere-circumference, or by the action of the Creator – to be held in a mutual awareness, which is love. This shrine was then ‘dressed’, lit, and a resonance built up. This creative-presentation coursework became a formative experience for me. I enjoyed tackling it with companionship, humour and naturalness. Much of it was fun, as well as profound, on that other, metaphoric path on the tidal river’s edge, estuary, meniscus, place of liminality – the ‘watery faculty that can lend itself to anything, daring to live with mysteries, questions and uncertainties’ (Matthews, 1994, p.63). I enjoy much other course-material too, especially on the imaginal (Kripal, 2014, p.267; Corbin, 1975) and the imaginative element articulated by Jeff Kripal, working as a ‘Gnostic Scholar’ in its ‘third classroom’ alongside those of sympathy and doubt, a new classroom of ‘gnostic epiphany’ (2007, p.140). Angela Voss has called for a ‘Methodology of the Imagination’ within an academic context ‘as a basis for the symbolic interpretation of texts and images [to] honour, and speak from, this meeting place of literal and spiritual realities’ (2009, p.1) as the true marriage of scholarship with spiritual wisdom, and with the imagination as a tool for reflexive methodologies. As an external examiner has repeatedly found, this course’s ‘holistic coherence’ is ‘an instance of innovation. There is much talk in educational theory about transformative education. This course gets closer to the reality of that concept than perhaps any other I have seen’ (Main, 2015, p.2). Having sampled this uniqueness so fortunately as a student, I also look for an individuated, creative Imagination, in conscious experience of human life as always within the divine context, in a living syzygy where the soul or True Self arises in wholeness and completion.