Celtic Illumination – a window into the Celtic soul by Christina Archbold 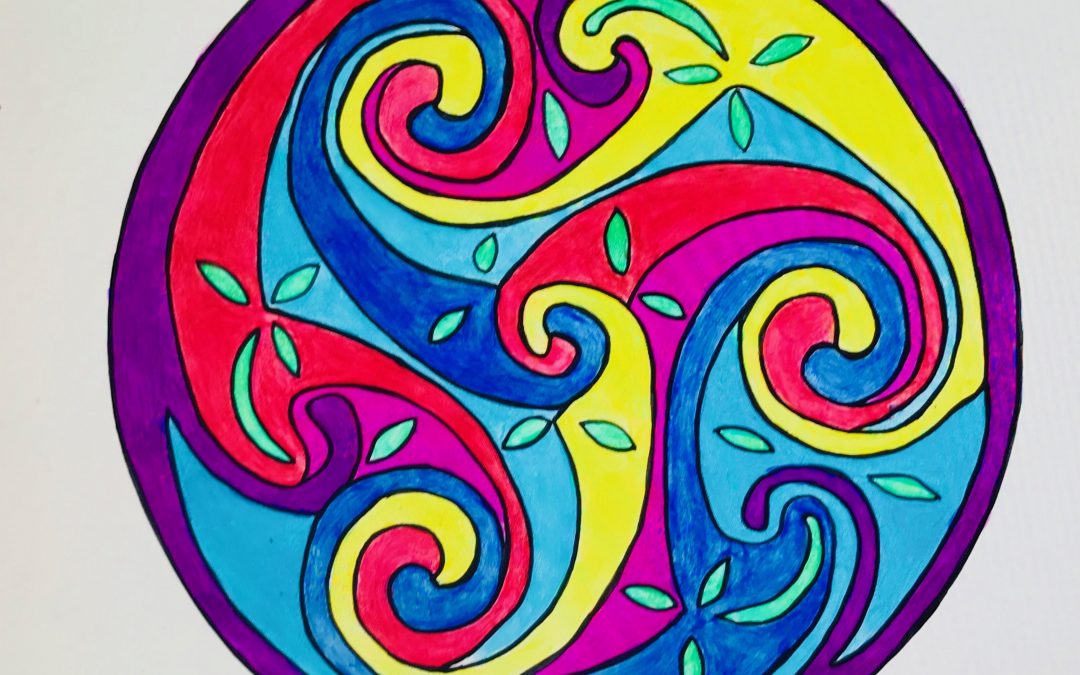 This creative project was inspired by a trip to Lindisfarne, also known as Holy Island in Northumberland. It was here that Eadfrith created the Lindisfarne Gospels, ‘one of the world’s greatest masterpieces of manuscript painting’, around 698 CE (Backhouse, 2014 p.7). The Gospels were created in honour of St. Columba who having died in 687 CE, was formally declared a Saint when it was found his body had not decayed on its exhumation in 698 CE.  After a walk around the Lindisfarne Priory ruins (which date from 1093 on the site of the earlier monastery), the project to ‘do some Celtic artwork’ was hatched in a café on the island and I went home clutching a copy of ‘The Celtic Design Book’ (Meehan 2007).

I suppose, in some strange way I was ‘inspired’ by doing the art work in the old sense of the word – receiving ‘the breath of God’. It was very unexpected. The spiral is found at all levels throughout the cosmos, from galactic arms to molecular bonds. It is one of the first symbols created by human artists appearing on very early artefacts such as stones in Newgrange in Ireland dating from 3200 BCE which feature ‘snake-like coils that represent the nineteen-year Metonic cycle’ (Quinn, 2006 p. 133). It is a physical expression of the archetypal circle in motion and is synonymous with the flow patterns seen in the curls of waves, ripples and whirlpools. This example shows what is called the ‘C’ curve and comprises seven centres joined within a circle. The underpinning geometry is constructed as follows: Celtic artists ‘sought not to imitate nature but rather to imitate her in her mode of operation’. (Tetlow, 2013 p.366). They wanted to capture the flow of nature as ongoing movement, that is as alive, not as a frozen snapshot in time. The Celtic knot with its interweaving of strands, continuously draws the eye along itself and creates that feeling of flow. Knots are constructed by the use of three overlaid grids. According to Meehan ‘the way in which the primary square, and its centre, secondary provide the coordinates for the division of the sides of the square (tertiary) may have been seen by early monks as a symbol of tri-unity – three in one.’  (2007, p.178). The geometry of the square symbolised the manifestation of the manifold universe and it was an important spiritual practice for them to contemplate how the Two, the infinite and the finite could be engendered by the One. The Tree of Life is a pre-Christian Celtic symbol deriving from the Druids. According to Bain, “The Tree of Life” makes an appearance in the Book of Kells growing out of a pot. He states that after the Synod of Whitby in 664CE ‘Following the victorious Church of Augustine, the Romanesque vine and rapidly produced decadent forms of Celtic Art’. and other plant forms replaced the Celtic “Tree of Life” (Bain, 1951, p.121). It’s not hard to guess which side of the debate Bain was on and given that most of the great illuminated gospels were produced after Whitby, the comment should be taken with a pinch of salt.

This piece took over 100 hours of work. Beyond starting with the idea of the Tree I allowed it to evolve organically and was surprised to find the heart shape in the branches – this was not done deliberately. I also had wanted to fill in the background with more detail, but the amount of time it would have taken was prohibitive, so I settled on a modern solution of just using paint. In working symbolically with the image, I have decided to use the fourfold hermeneutic described in Voss (2009, pp.11-12). In being the creator of the image, the challenge is not to think it has already ‘spoken’ – to use the metaphor of Angelo (2005). As Voss says, ‘True imagination…is the mode in which the soul reveals its nature through the language of symbol and metaphor.’ (2009, p.4). So, what is my soul communicating?